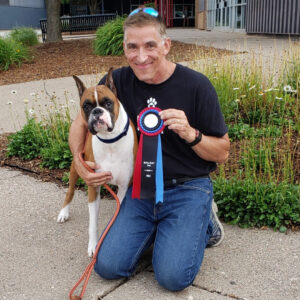 Tom Rezmer got involved in dog training because he wanted to teach his first Boxer, Killian, to have manners. In 2006, he started training in AKC obedience with a local all-breed dog club.

In 2011, Tom became involved with nose work after his wife and fellow instructor, Erin, encouraged him to train Killian in the sport while she trained their other Boxer. He started taking nose work classes and began teaching at For Your K9 in 2014.

Tom teaches classes that range from the advanced level to those competing at the NW3/Elite level. He has taught nose work seminars/workshops. He is a Certified Nose Work Instructor (CNWI) through the National Association of Canine Scent Work (NACSW) and an American Kennel Club (AKC) Scent Work judge.

Along with nose work, Tom trains and competes with his Boxers in agility and obedience and has earned many titles. He has volunteered at many nose work, obedience, agility and rally trials in every role. He is a member of three Boxer clubs and a member/instructor of a local all-breed volunteer dog training club where he has served as treasurer, president and agility instructor.

Tom’s strengths include his ability to see what others don’t see and use that insight to help the dog/handler team achieve their goals.

Meet the rest of our team.