Home » About Us » Our Team » Tonya Scribner 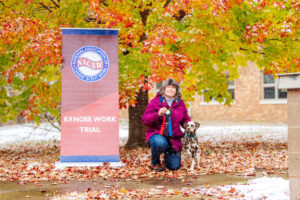 Tonya has been in love with dogs forever, at the age of 7 may have ‘accidentally’ told some neighbors with a liter of mutts that my parents had agreed we could get a puppy. Since the puppy showed up at the back door while her parents were at the hospital for the birth of one of her younger siblings, she got to keep the puppy.  The obsession only grew from there.

Tonya was first introduced to Nosework in 2007 via a workshop at a local dog club then another workshop several years later then sporadic class offerings but there was just nothing local that was going to amount to much. Finally in 2016 she made a decision to commit to really learning nosework and began traveling to Chicago to train with For Your K9.

She currently have 2 Weimaraners and a Dalmatian who all love to sniff. Besides nosework we are active in agility, obedience and tracking and I teach agility and nosework in the Madison, WI area. Tonya loves watching teams learn together and continue to be amazed at all the games our dogs will play with us.

Meet the rest of our team.